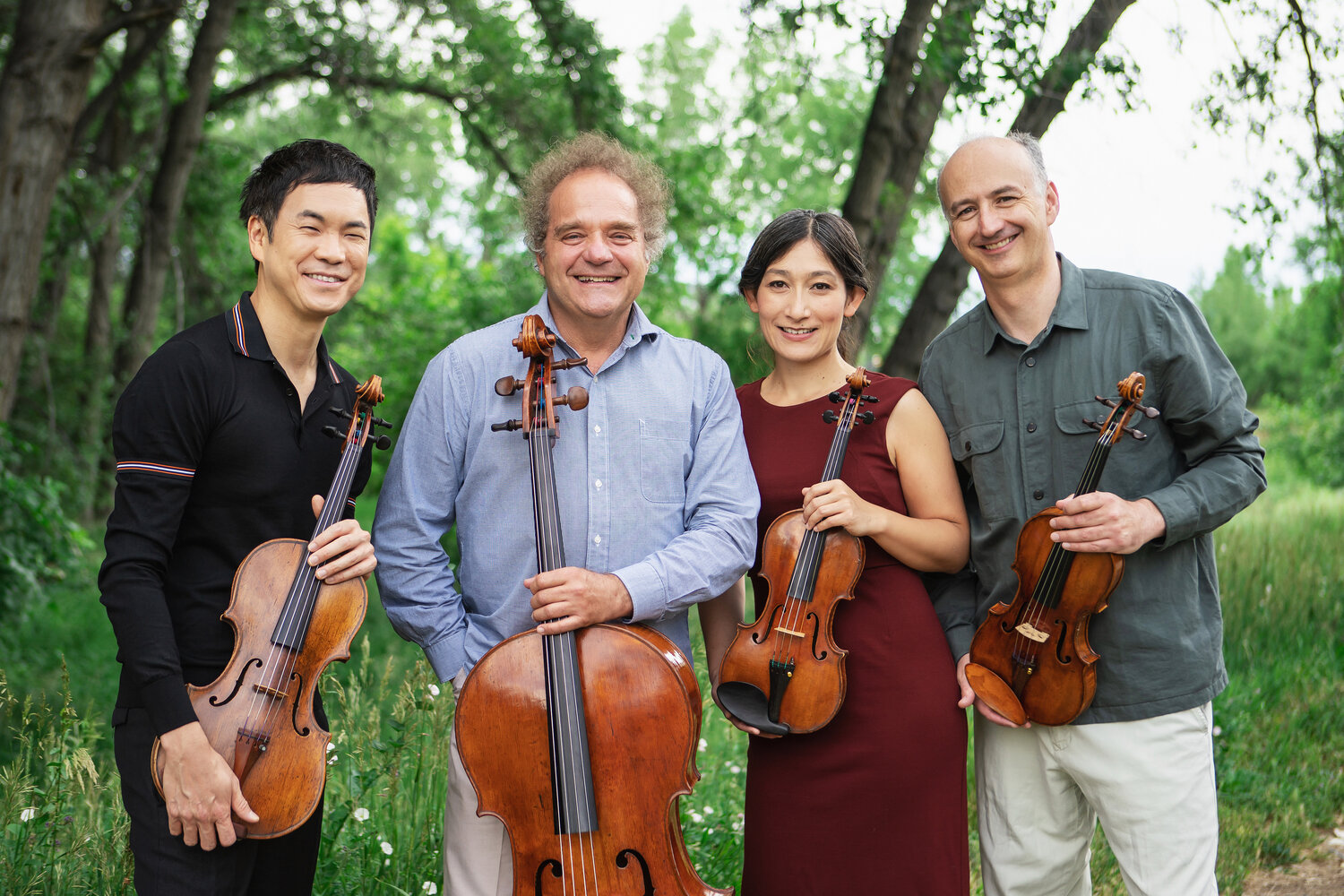 The world-renowned Takács Quartet, is now entering its forty-eighth season. Edward Dusinberre, Harumi Rhodes (violins), Richard O’Neill (viola) and András Fejér (cello) are excited about the 2022-2023 season that begins with a tour of Hong Kong, Japan and South Korea, and includes the release of two new cds for Hyperion Records. A disc of Haydn’s opp. 42, 77 and 103 is followed by the first recording of an extraordinary new work written for the Takács by Stephen Hough, Les Six Rencontres, presented with quartets by Ravel and Dutilleux. As Associate Artists at London’s Wigmore Hall, the Takács will perform four concerts there. In addition to programs featuring Beethoven, Schubert and Fanny Mendelssohn Hensel, one concert consists of works by Britten, Bartók and Dvořák that highlight the same themes of displacement and return explored in Edward Dusinberre’s new book Distant Melodies: Music in Search of Home. The book is published by Faber and the University of Chicago Press in the Fall of 2022. The quartet will perform the same program at several venues in the USA, complemented by book talks. During this season the quartet will continue its fruitful partnership with pianist Jeremy Denk, performing on several North American series.

The Takács Quartet is known for innovative programming. In 2021-22 the ensemble partnered with  bandoneon virtuoso Julien Labro to premiere new works by Clarice Assad and Bryce Dessner, commissioned by Music Accord. In 2014 the Takács performed a program inspired by Philip Roth’s novel Everyman with Meryl Streep at Princeton, and again with her at the Royal Conservatory of Music in Toronto in 2015. They first performed Everyman at Carnegie Hall in 2007 with Philip Seymour Hoffman. They have toured 14 cities with the poet Robert Pinsky, and played regularly with the Hungarian Folk group Muzsikas.

The Takács records for Hyperion Records, recently winning awards for their recordings of string quartets by Fanny and Felix Mendelssohn, and - with pianist Garrick Ohlsson - piano quintets by Amy Beach and Elgar. Other releases for Hyperion feature works by Haydn, Schubert, Janáček, Smetana, Debussy and Britten, as well as piano quintets by César Franck and Shostakovich (with Marc-André Hamelin), and viola quintets by Brahms and Dvorák (with Lawrence Power). For their CDs on the Decca/London label, the Quartet has won three Gramophone Awards, a Grammy Award, three Japanese Record Academy Awards, Disc of the Year at the inaugural BBC Music Magazine Awards, and Ensemble Album of the Year at the Classical Brits. Full details of all recordings can be found in the Recordings section of the Quartet's website.

In 2014 the Takács became the first string quartet to be awarded the Wigmore Hall Medal. In 2012, Gramophone announced that the Takács was the first string quartet to be inducted into its Hall of Fame. The ensemble also won the 2011 Award for Chamber Music and Song presented by the Royal Philharmonic Society in London. Based in Boulder at the University of Colorado, the members of the Takács Quartet are Christoffersen Faculty Fellows, and the grateful beneficiaries of an instrument loan by the Drake Foundation. The members of the Takács are on the faculty at the Music Academy of the West in Santa Barbara, where they run a summer string quartet seminar, and Visiting Fellows at the Guildhall School of Music, London.