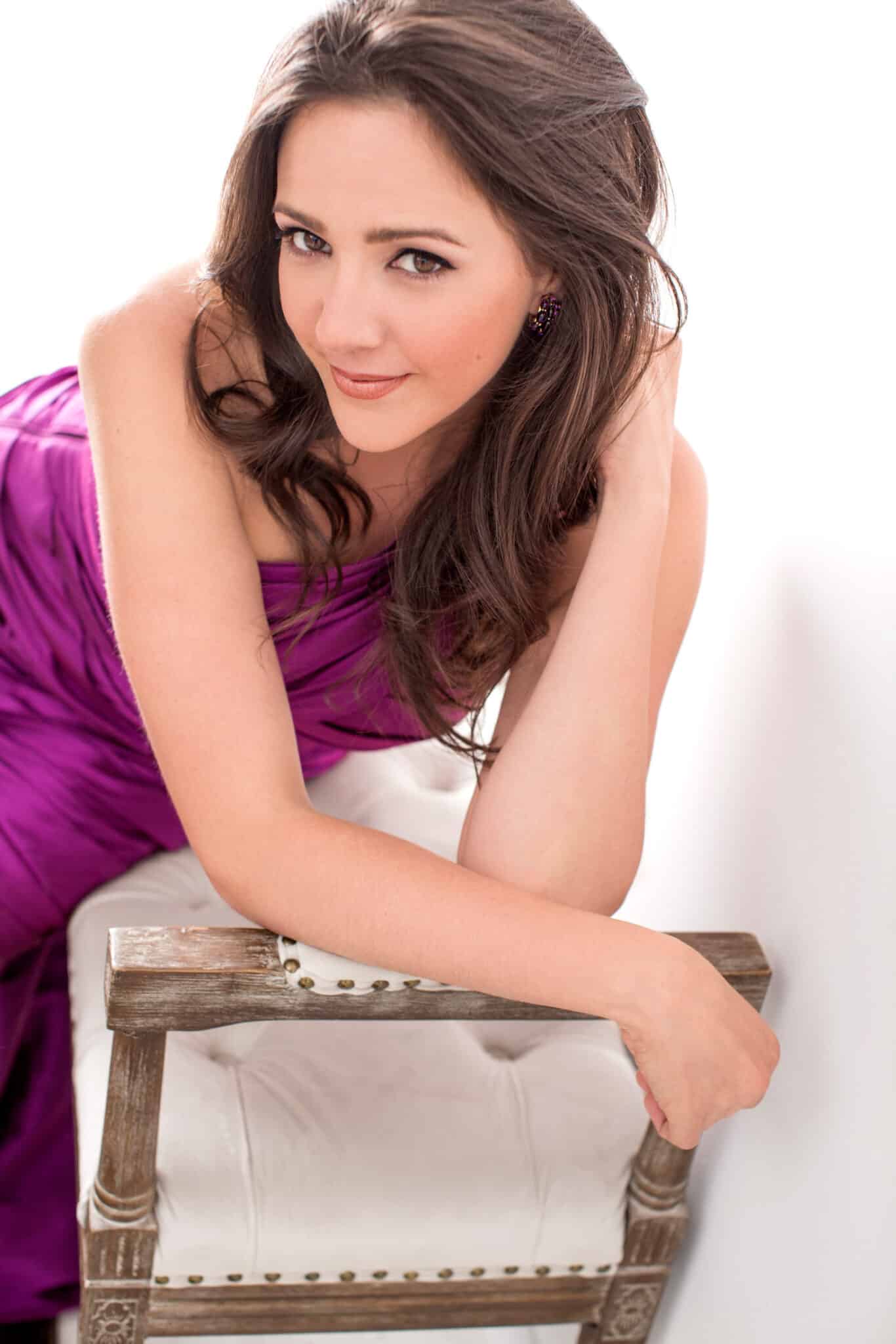 The 2002 and 2003 Music Academy alumna and recipient of the Metropolitan Opera’s 2010 Beverly Sills Artist Award has established herself as one of today’s most sought-after singing actors and recitalists.

In the 2020-2021 season, Susanna returns to Santa Fe Opera as Lucy Harker in the world premiere of John Corigliano’s The Lord of Cries. She also gives a recital at the 92nd Street Y featuring Schubert’s Der Hirt auf dem Felsen, alongside clarinetist Anthony McGill and pianist Myra Huang, and joins the Oratorio Society of New York in a virtual performance of Handel’s Messiah. Previously scheduled engagements include performances at the Metropolitan Opera as Micaela in Carmen, as well as a concert with the Chamber Music Society of Lincoln Center featuring music by Handel and Copland, performances of Mendelssohn’s Symphony No. 2 with the Dallas Symphony Orchestra, and a recital tour alongside mezzo-soprano and Music Academy alumna Sasha Cooke featuring music exclusively by female composers. Additionally, the month of February is marked by the release of a new CD with Michael Tilson Thomas and the San Francisco Symphony, featuring Berg’s Sieben Frühe Lieder, from a recording made in 2018.

In the 2019-2020 season, Susanna Phillips returned to the Metropolitan Opera for a twelfth consecutive season as Countess Almaviva in Le nozze di Figaro and as Musetta in La bohème. Concert engagements included the finale of Beethoven’s Symphony No. 9 with the San Francisco Symphony at its opening night gala concert, led by Michael Tilson Thomas, Mozart’s Great Mass in C minor with the New York Philharmonic, led by Jaap van Zweden, Handel’s Messiah with the Philadelphia Orchestra, under the baton of Jane Glover, and Brahms’ Ein deutsches Requiem with the Oratorio Society of New York. She had also been scheduled to make role debuts in the title role of Kát’a Kabanová at the Metropolitan Opera and in the title role of Floyd’s Susannah at Opera Theatre of St. Louis, while in concert, she had been scheduled to sing Beethoven’s Missa Solemnis on tour at Carnegie Hall with the Atlanta Symphony Orchestra and Adams’ El Niño with the Houston Symphony, under the baton of David Robertson.

In the 2018-2019 season, Susanna returned to the Metropolitan Opera for her role debut as Micaela, as well as Musetta and Donna Elvira in Don Giovanni. She also joined Cincinnati Opera as Countess Almaviva in Le nozze di Figaro. On the concert stage, she performed and recorded Berg’s Sieben Frühe Lieder with Michael Tilson Thomas and the San Francisco Symphony, appeared in Mahler’s Symphony No. 4 and Ravel’s Trois Poèmes de Stéphane Mallarmé at La Jolla Music Society’s SummerFest, joined the Huntsville Symphony in a concert celebrating Alabama’s bicentennial anniversary, and gave a solo recital with pianist Myra Huang at the Mostly Mozart Festival in New York City.

Highlights of previous seasons include numerous Metropolitan Opera appearances: as Fiordiligi in Così fan tutte with James Levine conducting, in what the New York Times called a “breakthrough night,” Rosalinde in a new production of  Die Fledermaus, Donna Anna in Don Giovanni, Pamina in Julie Taymor’s production of The Magic Flute, Musetta (both in New York and on tour in Japan), Clémence in the Met premiere of Kaija Saariaho’s L’amour de loin, Antonia in Les contes d’Hoffmann, and as a featured artist in the Met’s Summer Recital Series in both Central Park and Brooklyn Bridge Park. In addition, she appeared at Carnegie Hall for a special concert performance as Stella in Previn’s A Streetcar Named Desire opposite Renée Fleming – a role she went on to perform, to rave reviews, at Lyric Opera of Chicago – and sang Ellen Orford in Peter Grimes with the St. Louis Symphony Orchestra. Ms. Phillips made house debuts at Opernhaus Zürich as Donna Anna and at Santa Fe Opera as Pamina, and subsequently performed a quartet of other Mozart roles with the latter company as Fiordiligi, Countess Almaviva, Donna Elvira, and Arminda in La finta giardiniera.  Other notable roles include Elmira in Keiser’s The Fortunes of King Croesus and the title roles in both Lucia di Lammermoor and Agrippina. Ms. Phillips has made appearances at Dallas Opera, Minnesota Opera, Fort Worth Opera Festival, Boston Lyric Opera, Opera Birmingham, Oper Frankfurt, and the Gran Teatro del Liceu, Barcelona.

An avid chamber music collaborator, Susanna teamed with bass-baritone Eric Owens for an all-Schubert recital which they took on tour in Chicago with members of the Chicago Symphony Orchestra, at the Gilmore Festival in Kalamazoo, Michigan, and at the Philadelphia Chamber Music Society. She also performed alongside Mr. Owens at Washington Performing Arts in a program co-curated by Supreme Court Justice Ruth Bader Ginsburg. Additional recital engagements have included chamber music concerts with violist Paul Neubauer and pianist Anne Marie McDermott as well as appearances with the Emerson String Quartet, at the Parlance Chamber Music Series in New Jersey with pianist Warren Jones, at the Chicago Collaborative Works Festival, in Thomasville, Georgia with Warren Jones and colleagues from the Metropolitan Opera, and at Twickenham Fest, a chamber music festival in Huntsville, Alabama, which she co-founded with bassoonist Matthew McDonald. She also made her solo recital debut at Carnegie’s Weill Recital Hall with pianist Myra Huang.

As resident artist at the Marlboro Music Festivals, Susanna was part of the Marilyn Horne Foundation Gala at Carnegie Hall, made her New York solo recital debut at Lincoln Center’s Alice Tully Hall, and appeared at the Kennedy Center in Washington, D.C. under the auspices of the Vocal Arts Society. She has won four of the world’s leading vocal competitions: Operalia (both First Place and the Audience Prize), the Metropolitan Opera National Council Auditions, the MacAllister Awards, and the George London Foundation Awards Competition. She has also claimed the top honor at the Marilyn Horne Foundation Competition, and won first prizes from the American Opera Society Competition and the Musicians Club of Women in Chicago.  She has received grants from Santa Fe Opera and the Sullivan Foundation, and is a graduate of Lyric Opera of Chicago’s Ryan Opera Center. She holds both her bachelor's and master's degrees from The Juilliard School and continues to collaborate with her voice teacher, Cynthia Hoffmann.

A native of Huntsville, Alabama, over 400 people traveled from her hometown to New York City for Ms. Phillips’ Metropolitan Opera debut in La bohème. She returns frequently to her native state for recitals and orchestral appearances.