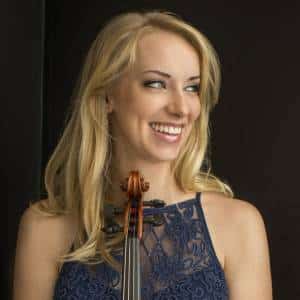 Praised for her “intoxicating” (New York Times) and “ravishing” (STRAD) performances of "silken finesse with gritty vibrancy" (Gramophone), violist Molly Carr enjoys a diverse musical career as recitalist, chamber musician, educator, and artistic director. She has been the recipient of numerous international prizes and awards, including the Primrose International Viola Competition, Chamber Music America, ProMusicis Foundation, Davidson Institute, Virtu Foundation, MAW Alumni Enterprise Awards, ASTA, and ARTS among many others. Her performances have taken her across North America, Europe, the Middle East, and Asia and been broadcast on BBC World News, CNN, PBS's Live from Lincoln Center, Good Morning America, and National Public Radio in the US, as well as on Canadian, Bulgarian, Israeli, Argentinian and Hungarian National Television and Radio. In October 2018, Ms. Carr was honored at the United Nations for her work with refugees around the globe through the Carr-Petrova Duo’s Novel Voices Refugee Aid Project; she was also chosen as one of America's leading "Creative Women" - subsequently appearing on the Sandi Klein Show "Conversations With Creative Women."

Ms. Carr is the violist of the award-winning Carr-Petrova Duo, as well as the Iris Trio, and is the former violist of the Solera Quartet - recipient of Chamber Music America's 2018 Guarneri Quartet Residency Award and the first and only American chamber ensemble chosen for the ProMusicis International Award. She has appeared as both performer and guest faculty in festivals around the world, including the Marlboro Music Festival, Ravinia Festival, Mozartfest, Huberman Course, Hyderabad SOTA Music Festival, Yellow Barn Music Festival, Music@Menlo, the International Musicians Seminar and Open Chamber Music at Prussia Cove, and the Perlman Music Program. Ms. Carr has collaborated with such renowned artists as Itzhak Perlman, Carter Brey, Peter Wiley, Ida Kavafian, Donald and Alisa Weilerstein, Pamela Frank, and the Miro, Orion and American Quartets, performing such premier venues as Carnegie Hall, Lincoln Center, New York’s Metropolitan Museum of Art, Princeton’s McCarter Theatre, Chicago’s Symphony Center, and the Jerusalem Music Center.

This season both the Carr-Petrova Duo and Iris Trio released debut albums to critical acclaim. In Fall of 2019, the Carr-Petrova Duo released “Novel Voices” on the Melos label. Spain’s Classical Music Magazine “Ritmo” chose the album as one of their “Top 10 CDs of the Month” hailing the duo’s performance of the Rebecca Clarke Sonata as “the best interpretation of this sonata to date.” Fanfare Magazine listed the album as “magical” and a “recording to have and hold dear, [...] one of the most compelling and successful viola and piano recitals - technically perfect and musically involving.” In February 2020, the Iris Trio released "Hommage and Inspiration" on the Coviello Classics label. The album was hailed by Fanfare as "superb [...] a five-star stand-out release, writ large with the spirit of chamber music," and was chosen by CBC as one of its "Top 10 Classical Albums to Get Excited About."

Upcoming seasons will see the release of several more albums - including a multi-album recording project with Enescu Competition Grand Prize Winner, Josu de Solaun, recording the complete piano and string chamber music of George Enescu on the NAXOS label. Other discography includes the Solera Quartet’s debut studio album entitled "Every Moment Present" on Contact Point Records, as well as an album of the Viola Sonata and early chamber works of Jennifer Higdon on the NAXOS label in 2012.

Ms. Carr serves on the Viola Faculties of the Bard College Conservatory of Music, the Juilliard School's Precollege Program, and Musical Arts Madrid in Spain. She is also the Founding Director for the award-winning non-profit Project: Music Heals Us, an organization which brings free chamber music performances and interactive programming to marginalized populations with limited ability to access the Arts themselves. She holds a B.M. and M.M. from the Juilliard School, having studied with Heidi Castleman, Steven Tenenbom, Patinka Kopec, and Pinchas Zukerman.