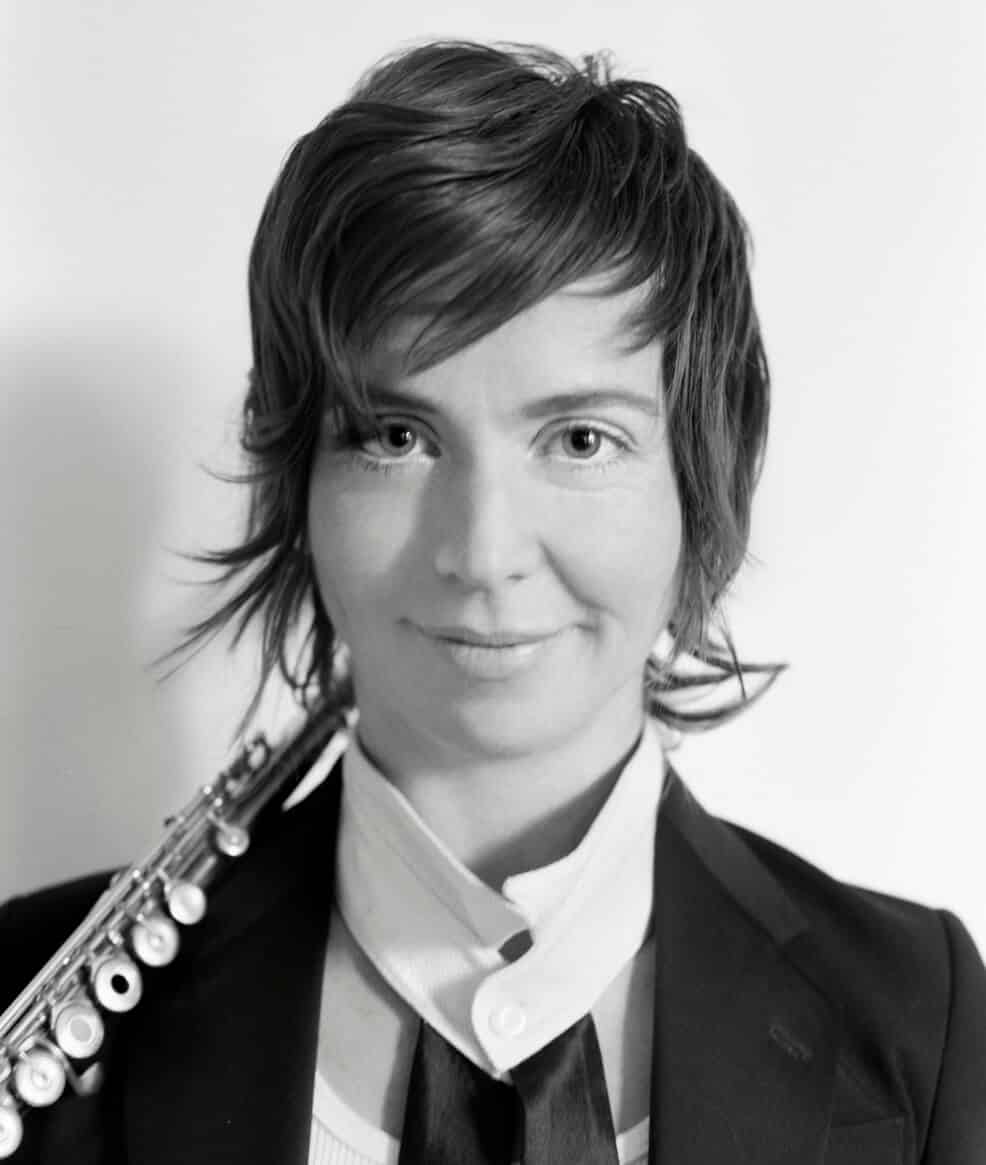 Claire Chase is a soloist, collaborative artist, curator and advocate for new and experimental music. Over the past decade she has given the world premieres of hundreds of new works for the flute in performances throughout the Americas, Europe and Asia, and she has championed new music throughout the world by building organizations, forming alliances, pioneering commissioning initiatives and supporting educational programs that reach new audiences. She was named a MacArthur Fellow in 2012, and in 2017 was awarded the Avery Fisher Prize.

In 2014 Chase launched Density 2036, a 22-year commissioning project to create an entirely new body of repertory for flute between 2014 and 2036, the centenary of Edgard Varèse’s groundbreaking 1936 flute solo, Density 21.5. Each season as part of the project, Chase premieres an evening of new music, with pieces so far by composers including Du Yun, Vijay Iyer, George Lewis, Pauline Oliveros, and Matthias Pintscher, among many others. She will release world premiere recordings of all of the Densitypieces in collaboration with Meyer Sound Laboratories in Berkeley, CA.

A deeply committed educator, Chase was named Professor of the Practice in the Department of Music at Harvard University starting in 2017.  She has overseen the development and implementation of education programs such as The Listening Room (for K-6 school children with no musical background), EntICE (for middle-school and high-school youth orchestras in underserved areas of New York City, Chicago, and Los Angeles) and a wide variety of collegiate and pre-professional training programs. She is also the co-artistic director, with her longtime collaborator Steven Schick, of the Summer Music Program at The Banff Centre for Arts and Creativity in Canada. In 2014, Chase was named an inaugural Fellow at Project&: Cultural Production with Social Impact. With Project&, composer Marcos Balter, and director Doug Fitch, Chase has created Pan, a piece for flute, electronics and mass community participation in the form of a large ensemble of non-professional or trained players/collaborators, which premieres in 2018 and will be performed with communities all over the world.

Chase founded the International Contemporary Ensemble (ICE) in 2001, described as the United States’ “foremost new-music ensemble” (The New Yorker), and is active as an ensemble member in ICE projects throughout the world. ICE has premiered more than 800 works since its inception and has spearheaded an artist-driven organizational model that earned the ensemble the Trailblazer Award from the American Music Center in 2010 and the Ensemble of the Year Award in 2014 from Musical America Worldwide. The ensemble can be heard in dozens of recordings on the Tzadik, Mode, Naxos, Bridge, New Amsterdam, New Focus, Samadhi Sound and Nonesuch labels, as well as on its own online, streaming video library of live performances, DigitiCE.

Chase grew up in Leucadia, CA with the childhood dream of becoming a professional baseball player before she discovered the flute. She received her B.M. from the Oberlin College Conservatory of Music in the studio of Michel Debost. She lives in Brooklyn.