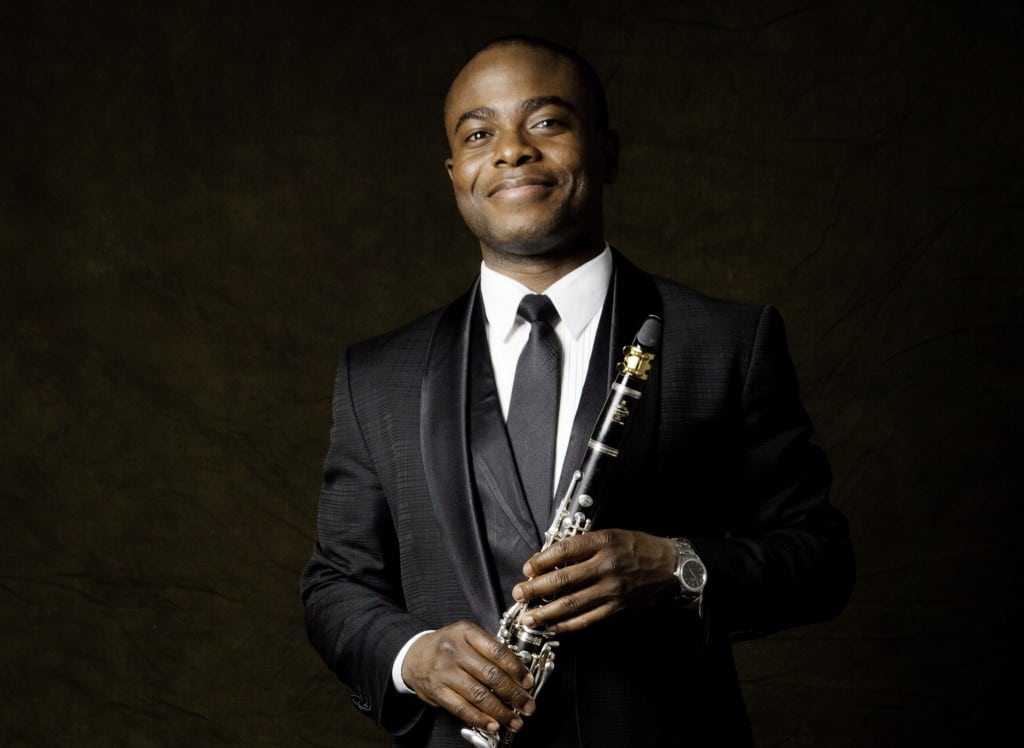 Hailed for his “trademark brilliance, penetrating sound and rich character” (The New York Times), clarinetist Anthony McGill is one of classical music’s most recognizable and brilliantly multifaceted figures. In addition to his dynamic international solo and chamber music career, McGill is principal clarinet of the New York Philharmonic—the first African-American principal player in the organization's history.

In 2020, he was awarded the Avery Fisher Prize, one of classical music’s most significant awards given in recognition of soloists who represent the highest level of musical excellence. McGill was honored to take part in the 2009 inauguration of President Barack Obama, premiering a piece written for the occasion by John Williams and performing alongside violinist Itzhak Perlman, cellist Yo-Yo Ma, and pianist Gabriela Montero.

McGill appears regularly as a soloist with top orchestras around North America, including the New York Philharmonic, Metropolitan Opera, Baltimore Symphony Orchestra, San Diego Symphony, and Kansas City Symphony. This season he’ll solo in the U.S. premiere of Esa-Pekka Salonen's Kínēma for solo clarinet and orchestra with the New York Philharmonic. He’ll perform “You Have the Right to Remain Silent” by Pulitzer Prize-winning composer Anthony Davis with the Detroit and Boston Symphony Orchestras. He’ll also serve as the Orlando Philharmonic's Artist-in-Residence, and during this series of performances he’ll premiere a new clarinet arrangement of the Bologne (Chevalier de Saint-Georges) Violin Concerto in A major, Op. 5, No. 2.

This past June, he performed as part of The Re-Collective Orchestra, the first-ever all-Black orchestra to play the Hollywood Bowl, in a CNN broadcast commemorating the first year Juneteenth was recognized as a Federal holiday.

In 2022-23, he reunites with the Grammy Award-winning Pacifica Quartet on a seven city tour in support of their new album "American Stories" (November 11, Cedille Records). Each work on the album is by a living composer, and shares unique perspectives shaped by the American experience–being unhoused on Los Angeles’ Skid Row (Ben Shirley), the murder of four young girls in the 1963 Birmingham church bombing (Richard Danielpour), the early young life of Muhammed Ali (Valerie Coleman), and the encounter of indigenous Americans (James Lee III).

Also, this season, Anthony joins soprano Susanna Phillips and pianist Myra Huang in concerts in Cleveland and New York. He’ll collaborate with comedian (and fellow clarinetist!) Kimberly Clark (Tiffany Haddish Presents: They Ready - Season 2 on Netflix;) for a unique storytelling comedy project in development debuting at Music Academy of the West in Santa Barbara in June 2023.

McGill is an ardent advocate for helping music education reach underserved communities and for addressing issues of diversity, equity, and inclusion in classical music. He serves on the faculty of The Juilliard School and the Curtis Institute of Music, where he holds the William R. and Hyunah Yu Brody Distinguished Chair. He is the Artistic Director for Juilliard’s Music Advancement Program, a weekend program dedicated to students who demonstrate a commitment to artistic excellence, which actively seeks young musicians from backgrounds underrepresented in classical music.

In 2020, in concert with a $30,000 charitable gift from the Avery Fisher Artist Program designated to a charity of McGill’s choice, McGill and Weston Sprott, Dean of the Preparatory Division of The Juilliard School, established the Weston Sprott and Anthony McGill MAP Summer Scholarship Fund so MAP students can take part in summer programs and festivals. In 2021 The Juilliard School announced a permanent endowment grant of $50 million for its Music Advancement Program (MAP) from Crankstart, which will fund full-tuition scholarships for all MAP students and program expansion.

In the aftermath of the killing of George Floyd on May 25, 2020, McGill launched a powerful musical protest video urging people to #TakeTwoKnees in demonstration against the death of George Floyd and historic racial injustice. His video went viral and hundreds of artists and citizens amplified the message and responded to the protest with their own videos using the hashtag #TakeTwoKnees.

McGill has been covered in The New York Times and the The New Yorker and has appeared on National Public Radio, Performance Today, and Mister Rogers’ Neighborhood. He has served as the Artist-in-Residence for WQXR.

McGill recorded the Nielsen Clarinet Concerto with Alan Gilbert and the New York Philharmonic. His previous album with the Pacifica Quartet was Mozart and Brahms Clarinet Quintets. He and his brother, Demarre McGill, joined the Chicago Youth Symphony Orchestras & Allen Tinkham, to record Winged Creatures, an album of works for flute, clarinet, and orchestra. Demarre and Anthony also recorded Portraits with pianist Michael McHale. In 2021, Anthony and pianist Gloria Chien released Here With You, an album of favorite works by Brahms, Weber, and Montgomery of longtime friends and frequent recital collaborators. McGill’s self-titled debut recording, also recorded with Chien, features early 20th century works by Gershwin, Rachmaninoff, Debussy, and Poulenc.

McGill serves on the board of directors for Cedille Records and the Harmony Program, and on the advisory councils for the InterSchool Orchestras of New York and Time In Children's Arts Initiative. He is a Vandoren Artist and Buffet Crampon Artist.